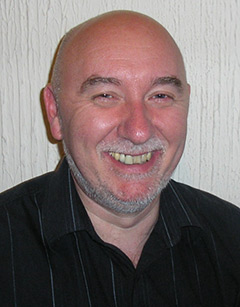 Graham studied piano, singing and conducting at the RSAMD now the Royal Conservatoire of Scotland.

On graduating from the Opera School he was appointed the youngest professional MD in Britain to the newly formed Independent Opera conducting “Macbeth” and “La Boheme”. Whilst based in London his credits as a conductor and vocal coach were with D’Oyly Carte Opera and English National Opera.

In 1981 he returned to Scotland to join the music staff of Scottish Ballet conducting “Swan Lake”, “Napoli” and “Romeo and Juliet” and as a part-time tutor at the RSAMD. He also worked as a vocal coach/repetiteur for Scottish Opera and conducted 16 full-scale operas for Glasgow Grand Opera. He also was Musical Director for the Scottish premiere performances of Sondheim’s “Into the Woods” at The Edinburgh Festival. He has his own company based in Glasgow, The Singers Company.

As a performer he has sung professionally in opera, summer seasons, pantomime, cabaret and frequently on television and radio. In musical theatre his roles have included Arvide in “Guys and Dolls”, Curly in “Oklahoma” (Leicester Haymarket), Freddie in “My Fair Lady” and has performed in numerous revues including “Side by Side by Sondheim”.

For a number of years he was the Scottish Representative for Cameron Mackintosh, a panellist for The Scottish Arts Council and has been a consultant for The Donald Dewar Arts Trust.

Graham has been involved with the Dance School since 1983 and in 1998 founded and established the national Musical Theatre Course.

Graham is founder and director of the national Young Scottish Musical Theatre Performer of the Year Award and is also an examiner for the ABRSM.

He was awarded the MBE in the Queen’s Birthday Honours list for services to Musical Theatre and Education in 2020.